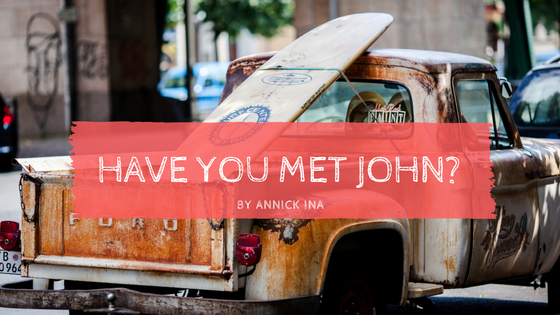 Meet John. John is hot. Not that that’s his only feature, but I thought I’d mention it. He’s got this beautiful golden skin and abs that make you want to trace them with your fingers. And his smile.. When he smiles, his whole face lights up and his eyes shine like two diamonds. John is cool. And he’s my imaginary surfer friend.

When he was younger, riding waves, exploring the world and life at the same time, something happened to him. On one of his trips out in the sea, he got attacked by a shark. A big white shark, with big sharp teeth. As John fell into the water, the big shark immediately noticed how delicious he looked and decided to have a taste.

It wasn’t a great scene. John’s friends watched, helpless, praying that he would come out of that bloody fight alive. It was horrible. These were the longest seconds of their lives, and most probably, of John’s too. But against all odds, he made it.

He was rushed to the hospital, went through emergency surgery and survived this terrible attack, losing his two arms. It was a miracle. Today John still surfs. He’s actually a surf instructor, and a hero to many, surfers or not.

I love how he found the incredible strength not to let that accident tear him away from his passion, and I find there is a lot of wisdom in it.

John has kept his smile despite everything. He’s an inspiration for everyone and keeps brightening the day of all those who cross his path. He has such a big heart, it’s amazing. He’s always ready to help, whenever and wherever he can.

But even though I’m always happy to have him around, there are some things I wouldn’t ask him to help me with. If I’m driving home with huge bags of grocery shopping, or planning on moving house and need help with big cartons, I won’t expect John to help me with that. And not only will I not expect him to help, I will also totally understand why he might not be able to and won’t resent him for it. Seems logical, right? You can’t expect a man with no arms to carry heavy stuff for you.

Now, meet Vanya. Vanya’s John’s neighbour. She’s a widow. Four years into their marriage, her husband shot himself, leaving her and their two daughters aged two and three on their own. At the time, she didn’t work, she had no family close by and she had to make superhuman efforts to rebuild a life for herself and her daughters, when she felt like her whole world was falling apart.

Vanya didn’t lose any limbs, but the day her husband died, a piece of her heart did too. That was the only choice she had if she wanted to survive, because otherwise, the pain she felt in her heart would have killed her too. Her husband’s death was Vanya’s shark attack.

Today, her daughters are older. She’s got a job, and they’ve got people around them who love them. Just like John, Vanya’s has got more or less a normal life now.

However, Vanya bears the emotional scars and consequences of what happened to her. And even though she has rebuilt her life, she’s not spritzing joy everywhere around her, as John does. You can’t really blame her though. When her husband shot himself, that same bullet that killed him, shattered her heart in a thousand pieces.

Emotional scars are not as visible as physical ones. I used to look at Vanya and wonder why she was so cold and pessimistic. But then one day, it hit me. I was at the supermarket, waiting in line to pay. John had just paid for his groceries and Vanya was right behind him. As a supermarket assistant helped John get his groceries back into his cart, Vanya helped too. Yes. Vanya who usually only cares about herself and her daughters, was helping John. And she didn’t even seem to mind. Why? Because it was obvious that John couldn’t do it himself and needed help.

This made me think. What if Vanya actually had a sign around her neck reading: “My heart and my life were a shattered when my husband killed himself”, how would people react? Would they you look at her in the same way? Would they still call her mean and cold? Or would they drop their judgement and realise that she did not choose to be that way, but had suffered from severe trauma that had left consequences.

And I wonder, John will not get his arms back, but he can get prosthetic ones. What about Vanya? Is the emotional damage her heart suffered irreversible, or can she learn to love and trust life again? Maybe the two of them should start hanging out together, Vanya would be John’s new arms, and he would be her new heart.